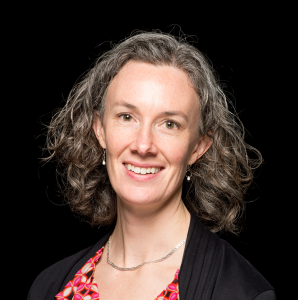 Holly Burnett’s career has spanned multiple countries and several roles as an engineer, technical consultant, business development leader, and mentor in the renewable energy industry. Currently, she serves as the senior vice president at Natural Power, a technical consulting firm that supports utility-scale wind, solar, and storage projects across North America. Her firm conducts due diligence reviews of these renewable assets when they are undergoing a financial transaction, providing technical risk analyses for investors and developers. Holly’s team includes civil, electrical, and mechanical engineers who review technical designs and perform data analysis on the varied sets of projects.

Holly graduated with her Bachelor of Science in Mechanical Engineering from Tufts University in 1999. Following graduation, she worked in Massachusetts as an engineer in pharmaceutical manufacturing at Millipore, before working as a systems engineer at a fuel cell startup, Nuvera Fuel Cells. From there, she moved to Peru and worked as a volunteer English teacher for a year. She returned to the United States to enter the Master of Science in Mechanical Engineering and Energy Analysis and Policy (EAP) Graduate Certificate programs at the University of Wisconsin–Madison in 2004, primarily to secure a career in renewable energy.

Following her time at UW–Madison, Holly moved to Seattle to work briefly for Puget Sound Energy, the utility company, before landing at Global Energy Concepts, an engineering services firm conducting technical reviews of wind projects. There, Holly was responsible for the wind resource and energy analysis team, overseeing over 150 energy assessments and 14,800 MW of installed wind power. While Holly’s initial plan was to do consulting for a few years before returning to working for a utility, it is an industry she has been a part of ever since. “Consulting was just a very good fit for me,” said Holly. She enjoys the pace of projects and working with and delivering results to clients who need her technical expertise. Most of all, getting the “exposure to and experience of a variety of tasks” resonated with her, whether it was turbine design or energy estimating.

When Global Energy Concepts was acquired by DNV, an international firm with experience in working offshore, Holly seized an opportunity to work abroad in the company’s London office in the United Kingdom to support development of both on and offshore wind projects in the UK and Europe. “It was awesome,” Holly says. “I would always recommend anytime someone has an opportunity to live someplace else and have [their] company pay for it [to take it].” Even though Holly was on maternity leave with her first child at the time, she says “you get so much out of any experiences that you can have in life that are a little different – I couldn’t say no.” During her time at DNV in the UK, Holly honed invaluable client management and communication skills over numerous business development activities throughout Europe. In addition, she learned a lot about UK culture, which has stuck with Holly to this day and benefited her in her current role at Natural Power, a UK-based firm.

Although Holly came out of graduate school wanting to pursue a purely technical path, and she has continued her technical skills through her consulting work, she has also realized over time that she has the communication skills, which not all engineers possess, to serve as the key liaison between technical engineers and clients. In addition, she has realized her passion for managing and mentoring young professionals. “I really enjoy helping people get where they want to go” and “helping people grow. Ultimately, I recognized where I could the most impactful – whether it is bringing good people into the [renewable] industry, connecting them to clients, or develop them technically or wherever they want to go.”

Looking back at her time at UW–Madison and the Energy Analysis and Policy (EAP) program, Holly touts the breadth of exposure of the classes in the EAP program in building a foundation in topics she has encountered in her career in renewable energy consulting, including the Energy Economics course and thinking about “the bigger picture” of energy policy.

As far as advice for current graduate students, Holly says it starts with building connections and expanding your network. “The reason I got my first job in wind was that I reached out to a woman who was running a company, and she agreed to give me an information interview. I asked her about doing consulting versus joining a utility, and her insights were super helpful.” Another mentor she had was also someone at a consulting firm, who she reached out to for an information interview, and kept in touch with once a quarter to ask questions about the energy industry. Holly has also been a member of Women of Renewable Industries and Sustainable Energy (WRISE) and participated in peer mentoring programs, which have been valuable in meeting others in the industry.

Finally, Holly says not to overlook opportunities that might allow you to grow in your career. She says that people often look for an ideal first job but fail to realize that “a job is just a step toward your destination. If a job has enough criteria that will allow you to build skills toward where you want to go and you can see that path, don’t turn down that opportunity.” As far as students who stand out as potential candidates for jobs, Holly says she looks for students who can communicate effectively, have a desire to solve technical problems, and want to help clients find solutions.