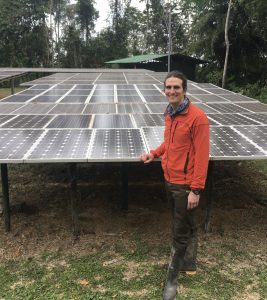 Eric O’Shaughnessy has a BS in Environmental Economics and Policy and earned a Master of Public Affairs, certificate in Energy Analysis and Policy (EAP), and PhD in Environment and Resources from the University of Wisconsin–Madison. He was a volunteer for the Peace Corps before he went to graduate school and has worked as a consultant, in government organizations such as the Department of the Interior, and for the National Renewable Energy Laboratory (NREL). Now he works as an independent renewable energy research analyst for clients including NREL, the Lawrence Berkeley National Laboratory, and the World Resources Institute. His work focuses on solar energy.

What do you do in your current role?

Eric is fond of exploring the edge of questions he encounters, and he enjoys the creative thinking part of his scientific research. More importantly, working as an independent analyst provides him more chances to understand the rapidly growing energy industry better. From his interview, it is easy to tell that he is keen on a life-long learning process, and he is always willing to learn new concepts from his ongoing projects.

What skills from graduate school are the most useful to you in your current role?

Eric really appreciates the quantitative skills he acquired at UW–Madison. Through statistics and econometrics courses, he learned the ropes and felt ready to explore more analytical skills by himself. He highly recommends the Benefit-Cost Analysis (PUB AFFR 881) and Introduction to Energy Analysis and Policy (PUB AFFR 809) courses for EAP students. He still applies the skills he learned in EAP 809 every single day on the job, and the econometric courses provided the foundations for the advanced econometric work he provides as a consultant.

Tell us about your path from graduate school to your current position.

He was a research assistant with Prof. Greg Nemet while he pursued his master’s degree in public affairs. The project was a collaboration between the Lawrence Berkeley National Lab and several universities, including UW–Madison. In the project, he used econometric methods to analyze a large dataset of solar photovoltaic installations. The research studied the economic trends in the home solar energy markets to inform more research on the price dispersion in the market for solar photovoltaic home systems.

Right after he graduated from La Follette School of Public Affairs with a certificate in Energy Analysis and Policy, he worked as a Market Research Analyst with NREL for almost four years. A year into that job, Prof. Nemet convinced him to turn his research into a PhD, which he began through the Nelson Institute for Environmental Studies at UW–Madison in 2016. His dissertation studied how market structure and solar installer competition affect prices and ultimately solar system deployment. The study also discussed how policy can shape market structure to optimize solar deployment and maximize the associated environmental benefits.

Since leaving NREL in 2019, he has worked as an independent research analyst. His current work builds on his previous experiences. He currently works under contract with NREL, the Lawrence Berkeley National Laboratory, and the World Resources Institute.

What kind of things did you do as a student that made you competitive as a job candidate?

He believes that his research assistantship with Prof. Nemet on the solar photovoltaics economic analysis strongly supported him in the energy job market. Apart from his work at the University of Wisconsin–Madison, Eric had worked for several years as a consultant in Washington, DC prior to graduate school. Eric returned to DC to do a summer research internship with the U.S. Department of the Interior halfway through graduate school, giving him the opportunity to spend time in Washington, DC after his first year in graduate school. He thinks highly of working in DC as a formative experience because he familiarized himself with the processes of policymaking and policy analysis in governmental agencies. He encourages graduate students to apply for internships to gain insight into the energy industry.

What advice do you have for current graduate students interested in a career in the energy sector?

Networking is critical! In general, he suggested current graduate students talk to people as much as possible. For instance, reaching out to professors and alumni is a helpful approach to gaining a better understanding of their career path and their current work. Additionally, he advised that graduate students should fully utilize both the academic environment and the local network in the energy sector in Madison. He also made a point of reaching out to research institutes and non-profit organizations nationally. He urged current students to work in the renewable energy field, we could use all the help we can get.